Apparently the meme of the week is, what you learn after living in city X. SF edition. LA edition.

Now here is my edition, reflecting on 10 years living in the town!

For the past couple of months I have been working in San Mateo (and biking).

I’ve noticed some key differences between bike riders in each city, in four key categories: bike accessories, attire, behavior, locking and parking. Here are the results of my highly unscientific study. 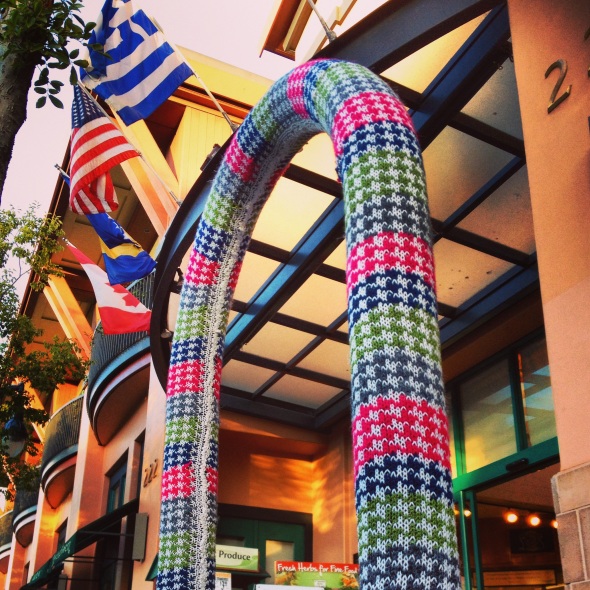 Parking meter racks.  But the odd thing is, I rarely see bikes parked in the official racks.  I see them chained to trees, street signs.  And some that aren’t even chained at all.  I saw a bike parked outside with just a kickstand for an hour.  Only half of the bikes are using the proper locking technique and a hefty U-lock.  I’ve seen cheap chains and cheap locks that left me thinking, I could steal that bike with some pliers.

I decided the people who locked up their bike properly must live in SF (since most of them have Caltrain tags).  And that bike theft must  be pretty rare in San Mateo.

Next up, accessories.  Oakland has a lot of “utility” and “transportation” bike riders.  These practical riders tend to have lots of accessories like racks, child seats and panniers.  Not very many of these people in San Mateo.  I rarely even see racks.  It is more like people on bikes wearing backpacks.  Also MIA in San Mateo?  Lights!  Hardly any bike riders have lights. It seems a little dangerous to me, as I spend a lot of time around El Camino, and it is both dark with fast moving traffic.

And following up the accessories, let’s talk about the attire too. Bike riders in San Mateo are frequently of the sporty variety.  Most people seem like they have special “bike riding clothing.”  Or they are wearing exercise gear.  Not so many people wearing “normal clothes.”  Except for the people with the Caltrain tags on their bikes.  I haven’t seen the hip Nutcase or Giro helmets either.  Most helmets look pretty utilitarian.  And everyone in San Mateo seems to have a helmet, whereas in Oakland, helmet penetration is more like 50%.  Another note, not much reflective gear in San Mateo.  And way too many people wearing all black at night.  I was shocked when I saw a father/son duo in all black biking around at night with no lights on El Camino.  Scary!

Lastly, let’s talk about behavior. And by that I mean following the rules of the road (and infrastructure).  .  .  I have now confirmed that they are pretty rare, the city offers up 4 featured routes.  And they don’t seem to be downtown. San Mateo County seems to be seriously lacking in bike infrastructure, there is a bike lane on Delaware.  I have seen a few cyclists brave El Camino.  And cars honk rudely at them.

But mostly I see people biking on the sidewalk at near full speed. And unlike in Oakland, they don’t warn you when approaching behind.  Or respond to the pedestrian death stare.  They kind just look annoyed that you are in the sidewalk impeding their path.  The lack of infrastructure probably means the bike riders feel like they belong on the sidewalk, since it is safer than the street.  But bike riders and pedestrians don’t mix well on sidewalks, and this surely leads to conflicts between the natural allies.

In Oakland, I don’t see many bikes on the sidewalk.  It happens on occasion, but most riders stick to the streets. Or risk enduring the wrath of the pedestrians…and occasionally the police handing out tickets. Many bike riders ring their bells to warn you.  I have yet to hear a bell before being overtaken by a bike rider here in San Mateo.

Riding a bike in San Mateo vs. Oakland is like a different planet.  Even though we want more bike lanes (in Oakland), and a safer Telegraph, we have it pretty good in Oakland.  At least in downtown, and most of the adjacent neighborhoods.  Yes, Jack London Square isn’t fully connected to Uptown with a bike lane.  And Chinatown doesn’t have any lanes yet.  But all in all with the Bicycle Boulevards, and quieter parallel streets, it isn’t so scary.

In San Mateo, bike riding feels like something for the adventurous, brave and committed cyclists. Riders do not seem to take as many precautions for safety (besides helmets) as our Oakland riders with lights, light colored clothing and reflective gear on those dark streets with high speed limits.

To quote Field of Dreams, “if you build it, they will come,” and the mass of bike riders in San Mateo are waiting.

The other night I listened to Chimamanda Adichie’s Ted Talk on the Danger of a Single Story.  This talk was both humorous and insightful, as she discussed growing up as middle class Nigerian, finding her voice as a writer, becoming “African” as she came to the US for college, and traveling to Mexico.

I was surprised that the idea of cleaning your plate because the children in Africa are starving thing spread even to Nigeria, in her childhood (which causes a completely different set of problems).

All of this underscored the problem of relying on a single narrative to shape your impressions of people or places.  For those of us who grew up in the “West,” the story we heard about Africa (and Africans) is one of AIDS, poverty and civil wars between “tribes.”  We didn’t hear about entrepreneurs, colleges, dense cities or beach side resorts.  Our story of Mexico, is a land of “illegals” who eat burritos and walk over to the US.  And not stories of a rich culture, or history, or cuisine and modern development.

And we can look at the “single stories” we tell of our own people.  Our black males are thugs, criminals and drug dealers.  Our Asian-Americans study hard and become engineers, scientists and doctors.  When someone reflects a different, and unexpected narrative, we call them exceptions.  Or tell them they aren’t actually members of their group.

When we talk about Oakland, our story centers around violence, corruption and despair. We ignore the tales of success, like homegrown businesses from Pandora to Blue Bottle to Oaklandish, changing everything from how we drink coffee, listen to music and how we show local pride.  Local schools improving 15% year over year or violent crime decreasing in 2013.

This extends to our pop culture and mass media, which ignores the diverse experiences here in the US and abroad, making us invisible.

Minimizing our perceptions of people and places based on a single perspective robs us of the chance to think critically, to experience things with our minds and eyes open, and create our own narratives. Hopefully, by seeking out and experiencing new stories and multiple stories we can create new realities too.

I recommend checking out this excellent Ted Talk.

It looks like the Oakland City Council decided to open up Latham Square to 2-way traffic.  This is disappointing on a lot of levels, but the most critical reason is because the city outlined an evaluation process, and then didn’t bother to follow it.

Last time I checked, there is a big difference between 6 weeks and 6 months.  If they stuck to the 6 month timeline, it would be ending in the next few weeks.  Other than a few signs on the block of the plaza, the city didn’t seem to “promote” the plaza to nearby residents.  There also didn’t appear to be a clearly defined way to evaluate the merit of the pilot.

The real problem is, we can’t exactly count on our elected officials to deliver what has been promised or follow the process they outlined.  But I guess that is par for the course anyway.

Saw this last week at the Temescal Farmer’s Market. Usually the signs say stuff like: “Stop War” and “Stop Driving.”

This was a first. And Hammer is from Oakland, and is leaving a lasting legacy. Find out what’s up with him, follow him on Twitter: @MCHammer

10. What’s the deal with the Oakland restaurant takeover robberies? How much cash can you really get, doesn’t everyone use a card in one form or another?

9. Is you can use your Kindle for your textbooks, how will students get extra cash from selling their textbooks?

7. Since Obama texted his VP choice out to his fans, do you think other politicians will start texting? Will political organizers start setting up group chat rooms and IMers as part of their staffs?

6. Isn’t is totally obvious that kicking the referee is a bad career move?

5. Why did Hollywood not believe in the Women movie? Haven’t there been a million so-called women-centric movies that have done well at the box office? (Sex and the City, Titanic, all 4 million romantic comedies where girl is in love with her mail best friend, J-Lo movies…..)

4. Does Seth Goodin’s post on rewarding your content creators make sense, is he off-base, or is it a mix of both?

3. Are you a twitter addict? Do you have time for twitter? Why didn’t master texter Obama send us a message? In case you are curious, here is twitter etiquette.

2. Are you looking forward to new macbooks as much as I am?

1. Will the takeover robberies stop, once the kids go back to school?