Error: Twitter did not respond. Please wait a few minutes and refresh this page.

My blog post is up on the Transform blog!  🙂
What a late-night meeting taught me about how parking concerns can block good development

I saw this on my way to the parking lot.

On my way to work the other morning, I got really irritated while I was waiting at the crosswalk.

The intersection, near my apartment is really annoying.  Particularly if you are using the crosswalk.  It takes for ever to cross the street because most cars speed by.  In the AM, you can wait for 10-15 cars to go by, before anyone stops.  Even though there is a light on the next block, and a good amount of congestion during commute hours.

So as I pulled out of my garage, I saw someone at the curb, and the light was red, I stopped for the pedestrian to cross.  I believe the official driving code says, all cars should stop if someone is in the crosswalk. The pedestrian was about 3/4s of the way through the crosswalk, and I continued to wait.  And the next thing I know, 2 cars nearly hit me speeding through the intersection and the crosswalk. They passed me really closely (think inches, not several feet), presumably to avoid hitting the person still in the crosswalk, but still bypassing me.  And of course, the light was red, so they had to stop 4 seconds later.

The pedestrian made it across pretty safely, but then I thought about all of the times that happens.  Cars speed over to the neighboring lane when a car is stopped, because they don’t want to stop or slow down.  This is pretty dangerous for everyone on the road, driving, walking or biking.  I know we have all done it, but I have tried to be a lot more cognizant about the whole thing, since it isn’t very safe.

So a few questions come up for me:

KCBS posted a great interview talking about street design and pedestrian safety on the roads.  Lots to think about!

I was chatting with a friend the other day, who had an interesting discussion with his boss.  His boss was “mad” because they weren’t friends.  And that was impacting his boss’ ability to supervise him.

Why Can’t We Be Friends?

Well, I tried not to laugh too hard about that. It is completely illogical.

The most important thing about my relationship with a boss is both that we are “friendly” and I feel comfortable talking to my boss and bringing up my concerns.  Next up, I want my boss to advocate for me.

Way down on the priority list is having my boss become my new happy hour buddy.  Which is actually kinda defeats the purpose, since the goal of happy hour is to gripe about work. 😉  Having your boss there would make it pretty awkward.

I know, that as work spills over into your personal life, and work time and personal time segue into a grey land in between, it is tempting to think of work as a place for socialization too.  And it is perfectly reasonable to have fun with your colleagues and spend time after hours.  But the reason you are at work isn’t to make friends. It’s to make your company successful.  And priority one as a manager is to help your employees be more successful so the company is.  Not new friendships.

So if your boss is prioritizing friendship as a condition to boss-ship…it is probably time to get a new boss. 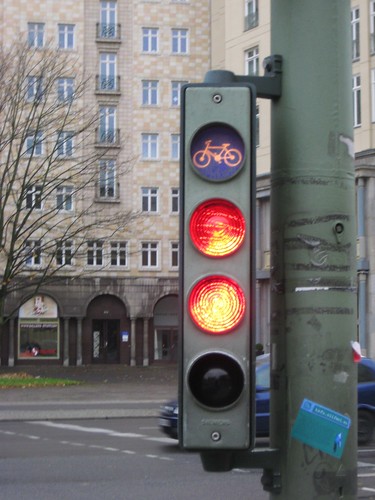 It was like summer in Oakland this weekend, and I biked over to my book club meeting.  And I learned an important lesson: on a nice day, biking near the lake, cyclists hate stoplights.

Grand Avenue has a lot of stoplights.  Many are traffic flow devices, with little risk for people on bikes if they ignore them, since there are no streets or driveways to cross.  The only worry is really those pesky pedestrians.  Technically, you probably won’t get hit by a car if you run the light.

On my way, I was stopped at a red light, looking around at the scenery. And then suddenly I am overtaken on all sides by other people on bikes blowing through the light at 15mph. The light turns green, and I start to pedal, and another 4 cyclists blow by me on both the left and the right.  One yells out “Oh *!*!*” as he blows past me on my right, and narrowly avoiding a collision.

I was thinking, after this near-miss….there is a reason we have traffic rules (pass on the left) and bike bells. It helps keep things more predictable. I am not expecting people to pass me on the right. Or people to blow past a red light.

But somehow the flexibility of being on a bike leads to being a loose with the traffic rules. Pedaling on the sidewalk when it is a shortcut. Or peddling in a crosswalk against the traffic light. And the unpredictability on the road leads to tensions.

Here is what is on my reading list this week:

So during the Olympics, at least initially, I wasn’t paying attention to commercials.  Then I saw a few interesting posts on this Caddy commercial, and well what can I say, I decided I should watch.

Other countries, they work, they stroll home, they stop by the cafe. They take August off. Off.
We’re crazy, driven hard-working believers. Those other countries think we’re nuts. Whatever.”

And after watching this commercial, I really thought it was quite perfect.  It wrapped up American values, American attitude, and American smugness succinctly.  With a side of American exceptionalism.  Genius.  The Ad Agency should get 10 gold stars.  Definitely the best commercial I have seen in a while, and it really sums up the aspirations of the the American Dream.

We have the hero, who works hard and pulls himself up by his boot straps to be successful.  And you know he is successful, because he has lots of stuff!  A McMansion! A $75K car! A pool!  And he works really hard, only taking 2 weeks of vacation a year and barely has time to greet his family before dashing off to work. But he is happy!  Because he’s got all the important stuff covered.

And clearly he has the sort of job you can come and go when you please. It doesn’t look like he is enduring any long morning commute at peak. Probably a senior-level white collar job.  A job that is really popular for people who look like him:

Work hard, create your own luck and believe anything is possible.  That’s the American Way.

But don’t forget to be born into the right family.  According to this new study on ancestry and “luck” covered in thy NYT last week, social mobility is controlled by your ancestors.  A lot further back than we thought.

To a striking extent, your overall life chances can be predicted not just from your parents’ status but also from your great-great-great-grandparents’. The recent study suggests that 10 percent of variation in income can be predicted based on your parents’ earnings. In contrast, my colleagues and I estimate that 50 to 60 percent of variation in overall status is determined by your lineage. The fortunes of high-status families inexorably fall, and those of low-status families rise, toward the average — what social scientists call “regression to the mean” — but the process can take 10 to 15 generations (300 to 450 years), much longer than most social scientists have estimated in the past.

I wonder how many more generations I have to go until anything is possible and I get one of those ELR’s?  Never mind, I’d much rather take August off and stroll to the cafe. N’est ce Pas?